Charlyne Yi steals your dreams of dating Michael Cera and being a successful filmmaker. 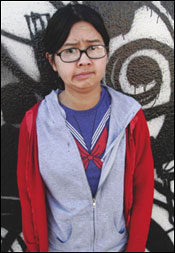